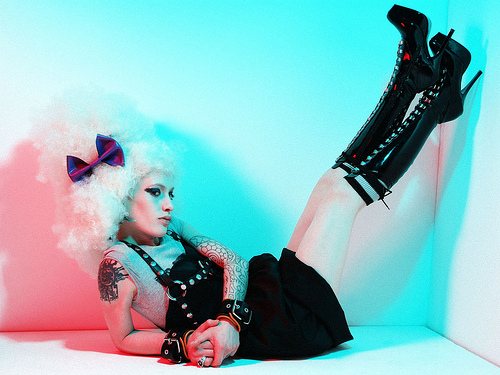 Berlin’s an easy place to blend in to.  You just throw on some big shades and a bright scarf, team them with a pair of drain-pipe jeans and Docs, maybe some legwarmers too. If you’re a girl you tousle up your hair for that bed head-look and if you’re a boy, you cut some Emo bangs into your hair.  Being a local in Berlin can be all about copping a certain style: eighties style.  Hip locals drink Champagne (Sekt) and cocktails in bars with brash names like Cocaine Cowboys and Flamingo while flipping through magazines with names like Neon. 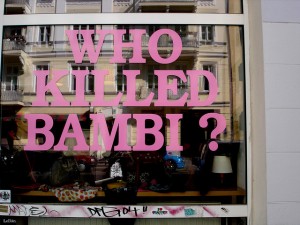 Berlin’s love of all things 1980s isn’t just skin-deep though – the retro revival in this city also exists on a deeper level. What? I hear you ask, the eighties had a deeper level? I know, it’s easy to think of the Decade of Decadence as a shallow time. And it was shallow, at least on the surface it was. But as the Goliath of capitalism gorged itself it became more bloated and sluggish, while the Davids of the underground multiplied and grew nimble from taking aim at it. Animal rights, graffiti & stencil art, recycling, culture jamming, fanzines, scrap art, hardcore punk, feminism: all of these dissenting subcultures and countercultures became more meaningful in the 80s, because they offered a refuge from the overwhelming social ills of corruption, waste and vanity. 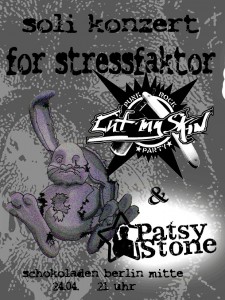 Berlin’s famous street art scene can be traced back to the hip hop and culture-jamming scenes of the eighties, as well as protest stencils like those done by Crass. Combinations of all three street art forms can be found on virtually every Berlin wall; in this city, street artists like Alias and El Bocho are taking them to the next level.  Their works are better-executed, the messages more profound and their imagery richer than that of their predecessors. They seem to be honing these once-shocking mediums to ensure that their messages still get out and sink in.

Print fanzines are making a comeback too, as are the glossier indie mags that base their style on eighties fanzine culture.  But the real revival of independent publishing is happening online.  Berlin has a vibrant blog culture which serves the purpose of reporting on alternative activities that are just too transient, elusive and widespread for any traditional paper to cover them. Then there are the old school regulars like Stressfaktor, which has been keeping Berlin’s left-wing underground connected for years.

Scrap art is also big in Berlin.  The style really became cool in the 1980s when it was adopted by edgy underground collectives like Mutoid Waste Co., who infamously recreated Stonehenge with Panzer tanks in Potsdamer Platz. Arresting metal sculptures may not steal the limelight quite as brazenly as they did back then, but they still define the city’s aesthetic: Eschloraque, Monster Kabinett, Peristal Singum at Wilden Renate and Majak Theatre are some of the underground institutions that embody Berlin’s industrial soul.

Two of Berlin’s most fashionable boroughs, Kreuzberg and Prenzlauer Berg, also came to international fame in the 80s because they acted as havens for squatters, punks, immigrants and anybody else who got a rude reception from the materialist mainstream. These areas may be swarming with trend-setters today but their unrepentant independence can still be seen in shops like Who Killed Bambi? which proudly flaunts its ’100% Corporation Free’ status. Other independent shops worth checking out are X-Trax (goth), Depot Zwei (hip hop) and Coretex (hardcore). 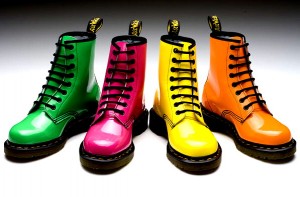 To gauge the popularity of gender-bending one needs look no further than Christopher Street Day (CSD) and Transgeniale CSD street parties, a.k.a. the German Gay Pride demonstrations. Transgender CSD emphatically blurs the boundaries between the genders to make a quasi-political point about categorization and stereotyping, where as the original CSD is more populist and quickly becoming ‘the new Love Parade’, according to some people. What’s uplifting is the amount of people from all across society who go to both events.  Clearly, Berliners are happy to keep people guessing about their gender and sexuality. Boy George would be proud!

Most of these underground, counter-cultural trends also existed in the 60s and 70s but it was the consumerism of the eighties that really brought them to the surface, particularly in cities like London and New York.  Berlin’s underground may not have a monopoly over the Mitte, Kreuzberg, Prenzlauer Berg and Friedrichshain these days but, by placing it next to modern capitalism, its value has become even clearer.  It’s analysis of the mainstream has only become sharper in contrast.  The next few years will be a turning point for this city, just as the 1980s were a turning point for New York and London. And since Berlin has only ever marched to the beat of its own drummer, there is a good chance that it will pick a different path than London and New York did.