Two buildings face each other on the Spree: one is a shiny highrise, its mosaic of metallic colours gleaming on the roadside.  It is the new Mercedes Benz building that will be constructed by Caimmo.  Across the road from it sits a beach club with a colourful graffiti-style sign and gates flung wide open.  Inside a festive assembly of shacks serving food and drinks encloses an umbrella filled courtyard which opens onto a Spree-side beach.

Humble spaces like the YAAM club epitomize Berlin’s style and spirit.  They put the spotlight on the city’s people: groups of students making nervous forays into the bar, throngs of hip travellers whose nonchalance suppressed the thrill of discovery; the Afro-Caribbean men who work in its stalls; the laid back scenesters who make their second home here, exuding an aura of purposeful calm that is years beyond their real age.  By contrast the Mercedes Benz building, and other new, shiny attractions which resemble it, are mute.  Their strikingly modern and high-end designs may catch the eye but they can only hold it for a few seconds.  They are no match for the ever shifting tapestry of humanity in YAAM and grassroots hang-outs like it.

The new highrise theatres, hotels, and in some cases, hostels, going up all around Berlin repel casual visitors.  Their steely facade may add a bit of drama to the city skyline from a distance but close up, there is no reason to linger long.  No open doors, no benches or grass or trees to soften its fortress-like shapes.  They are slowly building another Berlin Wall around the Mitte, a Wall of impersonal modernity which closes its doors to the intimate, ramshackle, anything-goes local lifestyle.

Buildings like Caimmo appeal to a type of person who has never been found in Berlin before the sudden arrival of mainstream tourism.  They are an imported vision of what a successful city looks like, and they will only ever appeal to imported people like out of town entrepreneurs and tourists who are lured mainly by the city’s low prices.  This imported tourism format has created an invisible boundary between the visitor and the locality, from behind which one can indulge in voyeurism without truly interacting with the city.  New highrises with their fortress-like fronts may provide photo opportunities but they lack a visible human presence.  They are an artificial construct invented for visitors who are on a “Berlin-today, Prague-tomorrow” style travel  itinerary: people who think that they can simply take and leave the city according to their schedule’s needs.

Berlin’s people are less easily dismissed.  Step into a venue like YAAM and its living, human theatre will close around you and turn the spotlight on you, expecting you to react and interact.  Random, natural venues like these have no beginning or end, they don’t fit neatly into schedules and itineraries.  They don’t offer guarantees or consistent standards but they do offer a chance to live and breathe the local culture and learn from it.  Isn’t that what travel is supposed to be about? 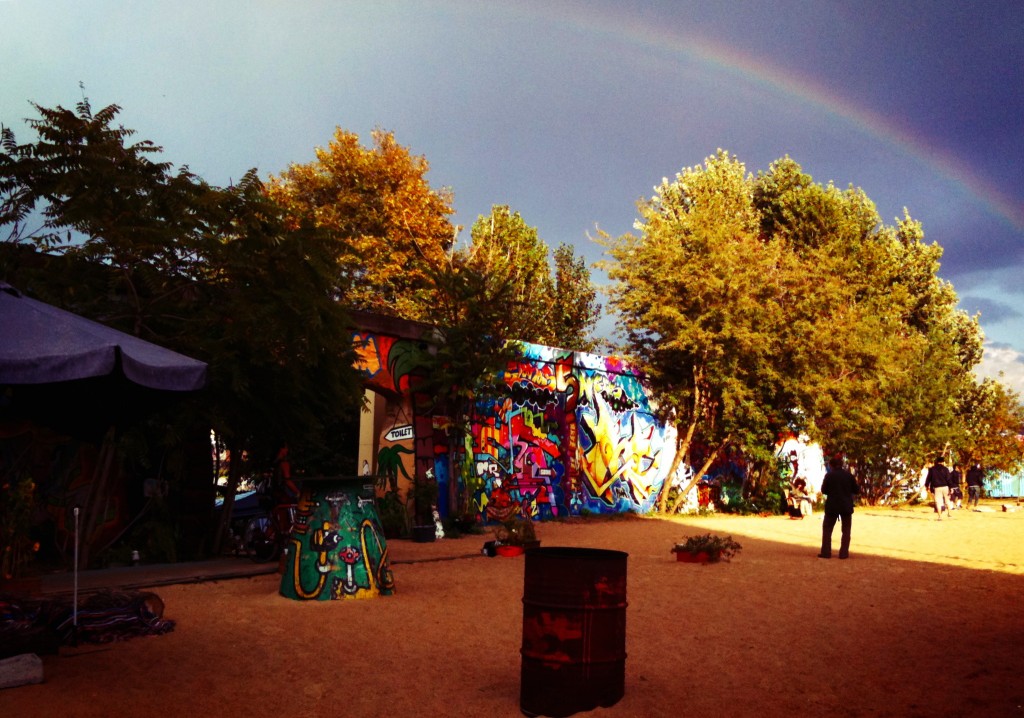 Venues like YAAM put Berlin on the map because they put the city’s people first.  They offer a stage for the denizens’ creativity, their personalities and their relationships.  Only the players and the props need to be added. And as in a play,  it is the spirit and the imagination that goes into the performance that matters more than the building’s design.

Right: how long can this beautiful reggae subculture remain?

All of Berlin’s most famous clubs, bars and attractions have grown up organically from the city’s mesh of personal and political histories.  They have been shaped by the unique, personal  quirks of the people who they embody: the scenesters, the musicians and artists who spent enough time there leave impressions of themselves in paint, structure and sound.  Berlin’s biggest attraction therefore is its people and its venues are famous because of them.  What will become of the city once they are all displaced by the sort of tourists who prefer to view things from an uninvolved distance?

Simply put, big, impersonal tours go against the Berlin and other cities’ spirit.  They are no way for visitors to find out what the city is all about.  Alternative Berlin and its partners within the local travel movement offer a glimpe of what it’s like to actually be a local for a few hours, not just a glimpse of the locals themselves.  We and our guides feel that tours should enable a real exchange between visitors and the city so that they leave the city with a memory of what Berlin really is, instead of the censored memories that various agencies have decided to sell them.  We believe that that it is better to preserve the local authentic vibe by sharing it with visitors, than by enclosing it within a wall.