Usually we pick five events for the month and give you the run down on what to expect. This month we’ve decided to take a slightly different approach. As we hurtle toward Christmas time in Berlin in a flurry of hats, scarves, Glühwein and glitter we’ve decided to give you a heads up on a couple of cool events, but then we’re diving into what it is our guides get asked most regularly this time of year. “Where are the best Christmas markets?” closely followed by “where’s the best place to celebrate Silvester” (the name for New Years Eve here in Deutschland).

There are a couple of stand out alternative events still on the calendar for this year, so before we get too excited over ice skating in inappropriate clothing and toasted nuts here’s some not to miss nights. 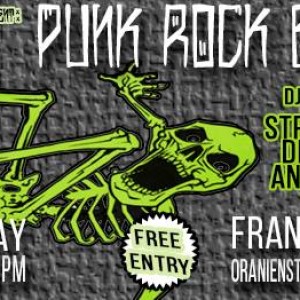 Franken is simply one of the best bars in Berlin. It’s loud, it’s unapologetically punk and Kreuzberg wouldn’t be Kreuzberg without it. Packed to the eyeballs on the weekends it’s a great place to soak up some Pilsners or whiskey colas (A giant portrait of Lemmy graces one of the walls). On December 9th some punk DJ’s are taking the place over and playing their pick of punk, hardcore, metal and even some hip hop. If you want to be a part of the real alternative Berlin for a night, stop by and make sure you order a mexikaner or ten.

We do A LOT other than go to bars but this time of year being in a damn fine pub is just the ticket for beating the blues. The Monterey Bar is one such establishment. Famous for it’s insanely large beer selection they’re taking the drinking for flavour game to the next level with this event. Keen to show off their also extensive collection of spirits they’re introducing “boilermakers”, namely a beer, expertly paired with a spirit. This isn’t a pint and a chaser affair, rather an excellent opportunity to learn more about world-class spirits and beers in a warm and friendly bar, whilst listening to some massive rock tunes. Awesome. If you’re off the alcohol this bar also has the best selection of booze free beers in Berlin. There’s even an alcohol free stout on the menu!

Christmas markets are one of Germanys most popular exports, with imitations open all over the world for the festive season. Here in Berlin the markets are a great place to socialise, eat some traditional food and drink a beer or hot, spiced wine. There are usually other attractions, such as amusement rides and always vendors selling things that you could gift to people you don’t necessarily like very much. Some are better than others and they are also quite different. Some are more traditional and serene, like the cover of a box of chocolate; others are a bit mad and full of very drunk people and kids. As is always the case with Berlin, there is something for everyone. So we’ve picked two popular markets to share with you.

This one is a big one. Nestled between some massive Berlin landmarks and open all through the week on the run up to Christmas it will cost you 1€ entrance to get in, but it’s worth it. The products on offer and the food are all classy and sourced from all over the world, making it a good location for gift shopping. This market also gets bonus points for its gigantic Christmas tree and it’s live festive performances.

Alexanderplatz is not a place you would go to spend time unless someone had a gun to your head. Usually reserved for wurst sellers and frantic shoppers the main square has your standard wooden hut Christmas market arrangement with plenty of food and LOADS of drink, if you wander off towards the Fernsehturm though you’ll find Berlin’s oldest Christmas market. This market gets bonus points for it’s giant Ferris wheel and ice-skating rink.

So what about New Years Eve? Berlin is notoriously lively over Silvester with celebrations lasting several days. Berghain will be open for four days straight but the line will be around the block. Our advice for NYE is have a plan. Don’t leave it until the last minute and don’t get stuck on the streets of Neukölln by night unless you WANT to be shot at. Sounds like we’re exaggerating, but it is really a war zone in some areas. Locals like to have house parties and will usually try to find a rooftop to get onto to watch the sky exploding. There are plenty of clubs selling tickets for parties. Stick with well-known venues and go somewhere you know you’re going to like the music. Check out the DJ’s and GET YOUR TICKET IN ADVANCE. All of the most popular bars and clubs will have tickets on sale already. We’ve picked two events that offer something different. 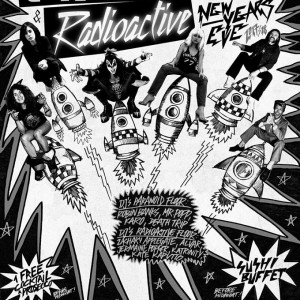 Described in the event as a “gigantic shit storm of super hits”. We’re big fans of the monthly Paranoid party and this double bill with the Radioactive DJ’s means two floors playing metal, hard rock, synth pop, new wave and punk. For less than 20€ you can also get a before midnight ticket which gets you entrance, a sushi buffet, a free cocktail and free prosecco. Get your tickets from Koka36 if you want to rock n roll all night with Berlin’s alternative crew.

If you’re in the mood for some excellent beers and some wholesome fun (giant Jenga, photo booth, fire pits in the garden) at an impressive location then Stone Brewing are having a shindig at their brewery. Expect a lot of brewed in Berlin Stone beers, a selection of other drinks and food from their bistro. Tickets will run you 100€ but if you feel like splashing out you can at least get out of the city and be classy drunk.

So that should give you some idea of what to get up to this festive season. We wish you a very merry Christmas and a happy new year!