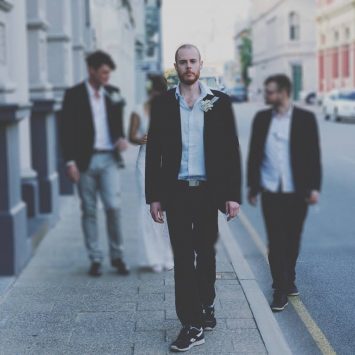 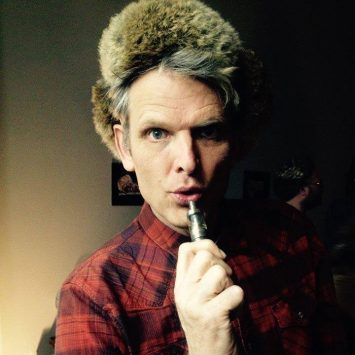 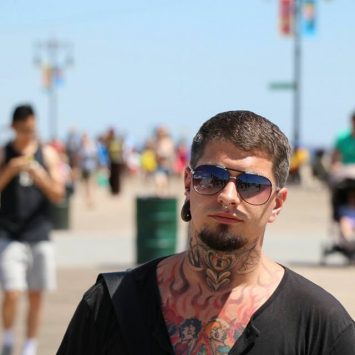 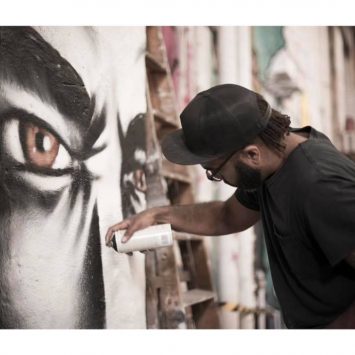 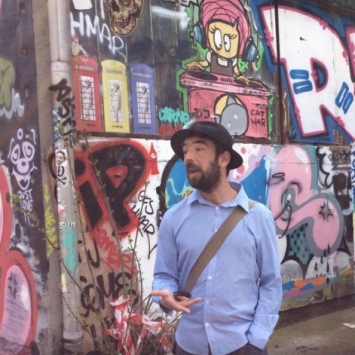 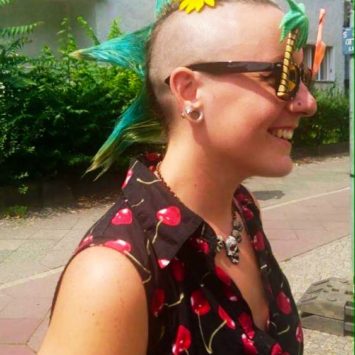 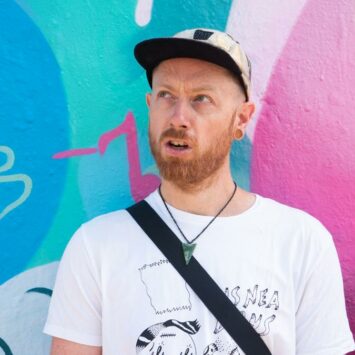 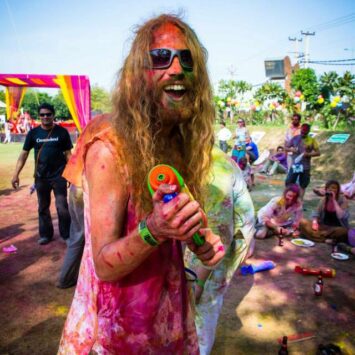 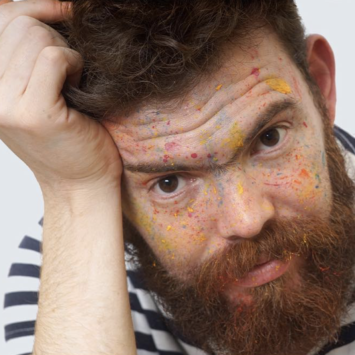 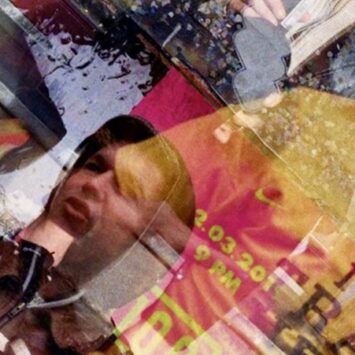 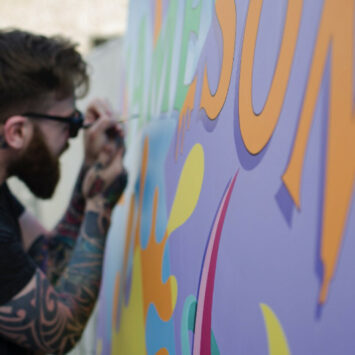 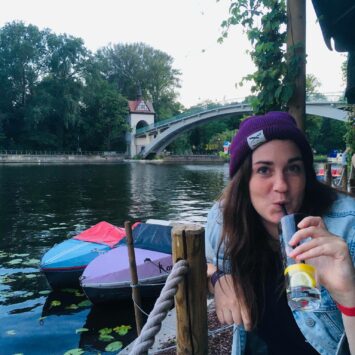 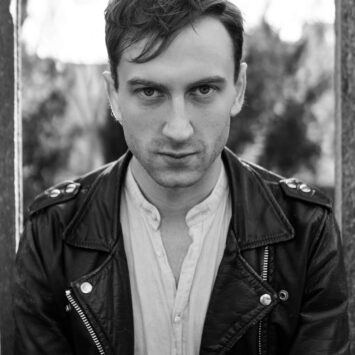 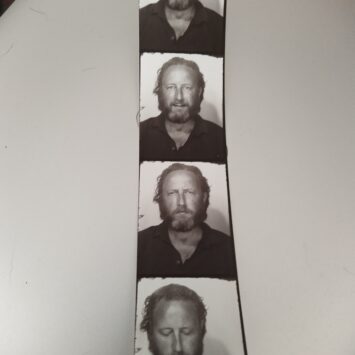 An Anglo-Australian import, Rob is a self confessed graffiti and street art geek. With experience working for one of Berlin’s renowned galleries, focused heavily on abstract post-graffiti, he has emerged himself in all aspects of the movement. Away from the world of legally questionable art forms Rob spends his time tinkering with electronic music and restoring antique furniture.

Jason’s a dad, singer, sayer,teller, artist, teacher, performer living in Berlin for 15 years. You might have seen or heard him playing in these punk rock bands : social Unrest, The Knit Separates or The Child Readers and even the Dysnea Boys. When he´s not playing live he´s out there guiding folk around the neighborhoods of Berlin. Most definitely a guy with a terrific understanding of underground Berlin and it´s many fascinating local stories.

As a graphic designer and make up artist from Germany, Bastian has a passion for colour and design and he loves this lively city filled with art. He has traveled to Australia where he came back as a licensed cowboy and he has also worked at New York Fashion Week as a make up artist but Berlin always seems to draw him back to his homeland. He loves meeting people form all cultures and background, which makes being a tour guide just the perfect side job for him.

Kurtis found his graffiti addiction from drawing in his fellow student’s books, on teachers’ desks, and the boys’ and girls’ bathrooms of his school in Pittsburgh, PA. Nearly the same time discovering crews and artists, Sesk, Seek, Krush, NSF and TimeBomb he felt compelled by the fades, the contrasts, 3D effects, the Icy Blues and Ultra Whites, the fatcaps, the wildstyles with the crisp and solid outline finishes, to take his art further. 10 years later in Brooklyn, New York where he lived another 10+ years, he found himself doing the same thing. Now living in Berlin, he spends his life creating music under the name KRTS with well-known and successful indie-label, Project: Mooncircle. Tour guide by day, Graffiti writer and musician by night.

Jake is from the UK and one of our most experienced and engaging tour guides. After a career as a touring and recording musician in a rock band Jake found himself in Berlin and working in the legendary Tacheles art house up until it´s closure. He´s a wonderful story teller, published author and chief English writer for the local football side FC Union in his other jobs. A colorful character with a warm and friendly persona. He´s one of the best guides you could hope for to take a tour with, through the streets of urban Berlin.

Nichole is a huge fan of the local punk culture and dinosaurs.
She also happens to be a chef and believes that Berlin is a hidden gem of a food city. Something she is more than happy to give recommendations about.
When she’s not entertaining tourists with her passionate rants about gentrification and the city´s music scene you will find her throwing elbows in a moshpit or shopping for dinosaur figurines to add to her collection.

Ben made his way from the much loved island of NZ to arrive at the unknown shores of Berlin on New Years Eve 2007 – an explosive start to say the least! And began a long relationship with the city, who’s street art and music scenes captured his imagination and helped to cultivate his own unique style. He has been giving tours since 2010 and putting his art in the streets for almost as long under the name B.S, you might also find him in Kreuzberg art shop “Let It Bleed” as part of the collective there supporting local artists. With over 10 years experience expect a tour filled with street art stories and insights into the where and why of modern Berlin.

Originally from Scotland, Ru found himself drawn to Berlin through his love of electronic and experimental music. In his time here, he has embedded himself in the underground music scene running parties and demos, as well as engineering sound installations and building custom-designed speakers. With a natural talent for storytelling, he has worked extensively as a tour guide across the sub-continent in India and Nepal, yet his real passion lies in the city of Berlin. With over 10 years of experience guiding people through the city, he will help you to explore Berlin and its culture through its stories and its history.

Born in Colombia, Antonio Castello (36), moved to Berlin in 2016 after working in New York city as photographer and artist for some years. Now in Germany Mr.Castello works as a freelancer Visual, experimental photographer and street artist. You can usually find his face all around the streets of the German Capital as part of his street art project in which the artist portraits himself in different situations.
Get ready to discover the streets of Berlin with this colorful happy latin guide, he will put a smile on your face as he tells you all his magic realism stories about the graffiti in Latin America, New York City and Europe.

Originally from London UK. he escaped the corporate rat-race to relocate to the bohemia of Berlin. Conceived in a London Squat by a mod father and hippy mother his upbringing was far from conventional. Having itchy feet he travelled extensively but found nowhere more rich in history and diverse as Berlin. So he has spent the last seven years immersing himself in the city which he now calls home and loves to share with others.

Trev is a street artist and illustrator originally from Ireland who now calls Berlin home.

He’s collaborated with numerous international brands such as Jameson Whiskey, BrewDog, and Absolute Vodka, and has had the pleasure of painting at street art and graffiti festivals and exhibiting his work around world from Amsterdam, Berlin, New York and San Francisco.

When he’s not making art, he enjoys his second favourite activity.. talking about all expects of street art and graffiti with his tour groups.

After graduating in economics in the UK, Anika returned home to Germany and quickly decided that she rather spends time showing people around her beloved Berlin than sitting in stuffy offices. Though she can tell you everything from Prussian Kings to the Berlin Wall, her main focus always stayed on her favorite part of the city, which is the alternative side of it. Spending almost all of her free time in independent cinemas, alternative rock concerts, queer parties, art exhibitions and skateparks, she knows about the city’s cultural landscape like no other and is happy to give out tips on anything going on from small street art galleries to the fine arts museums, from cosy jam sessions to Ballett and Opera.

This is MD. From the picture shown, you would be forgiven for thinking he is the reincarnation of a 7th century Saxon warrior who has seen too much. Don’t be afraid – you’re looking at an disarmingly friendly Canadian expatriate who just happens to struggle with smiling in photographs.

Having studied European modern art history and theatre in Toronto, MD will open your eyes to the vast array of artistic styles that sprung from Berlin’s alternative culture – from the Dadaists of the 1920s to contemporary graffiti and street art, and from the clangorous “Berliner Krankheit” of 1980s West Berlin to current Dionysian celebrations of techno.

J.R. is American, and has been in Berlin since 2016. He is an aspiring writer, who does not write. A wanna be chef, who advocates for frozen pizza. He pretends to be intellectual, but does not read enough, and watches way too much bad television. He thinks that he has a great head of hair, but ignores his ever growing receding hairline. Very rarely does he wear underwear, and when he does, its leather. J.R. ‘s biggest joys in life are looking for good tacos, drinking craft beer, and taking walks with strangers around Berlin.