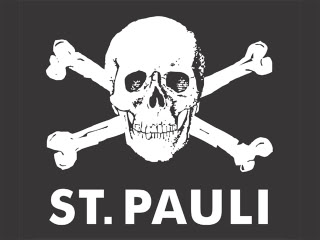 Ever wonder where this punk symbol came from? I had no idea that it was associated to this football club that has been going for absolute ages.. Many football fans will probably laugh at my naivety, but I am not a big football person, so I was quite astonished to find out about the football team that has been taking Germany by storm for 100 years this year and has a fan base of over 11 000 000 in Germany alone – there are also about 200 registered fan clubs, many of them outside Germany.

The club began its existence in 1899 as a loose, informal group of football enthusiasts within the Hamburg-St. Pauli Turn-Verein 1862. They were soon founded as an official football club on May 15th in 1910, and will be celebrating their 100 year birthday this May..

This group did not play its first match until 1907 against a similar side assembled out of the local Aegir swimming club. They originally played as St. Pauli TV in the Kreisliga Groß-Hamburg (Alsterkreis) until 1924 when a separate football side called FC St. Pauli was formed.

For more information on their playing history.. see an article here 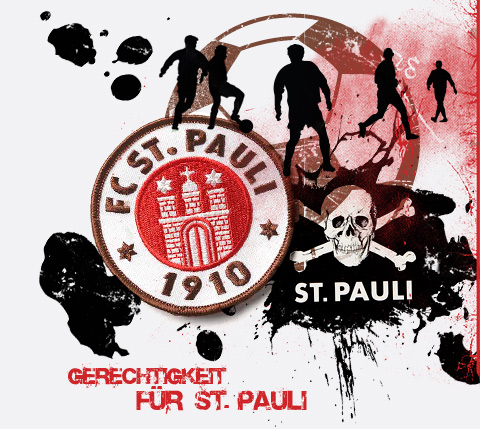 It was in later the mid-80’s, that St. Pauli went form being a traditional club to a cult club. The club was also able to use the location of its ground in the dock area part of town St. Pauli near Hamburg’s famous Reeperbahn – centre of the city’s nightlife and its red-light district – to its advantage. An alternative fan scene emerged built around left-leaning politics and the social event and party atmosphere of the club’s matches. 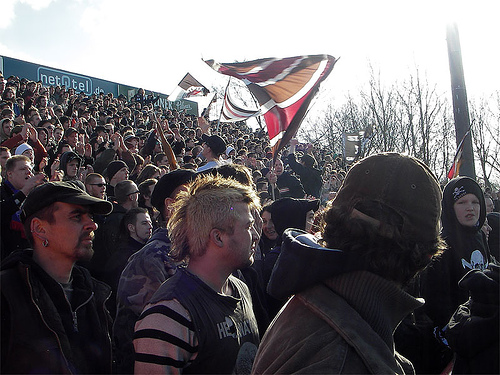 Supporters adopted the skull and crossbones as their own unofficial emblem. The club started to become associated with the punks and the antifascist movement. St. Pauli became the first team in Germany to officially ban right wing, nationalist activities and displays in its stadium in an era when fascist inspired football hooliganism threatened the game across Europe. In 1981, the team was averaging crowds of only 1,600 spectators: by the late 90’s they were frequently selling out their entire 20,000 capacity venue. 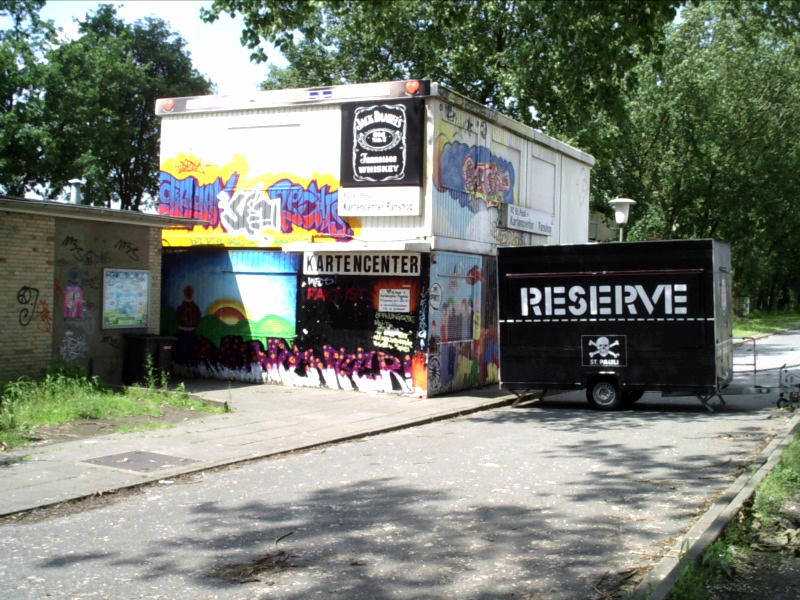 St. Pauli gift shop outside their home, the Millerntor-Stadion in Hamburg.

St. Pauli is also a worldwide symbol for punk and related subcultures.The unofficial Totenkopf logo and the team’s brown and white football jerseys have often been worn by international artists such as Asian Dub Foundation. Turbonegro recorded a special version of their song “I Got Erection” with re-worked German lyrics for St Pauli. Bad Religion played a charity match against St. Pauli’s third team in 2000. KMFDM frontman and Hamburg native Sascha Konietzko is a recognizable St. Pauli fan, even at one point placing a huge picture of a fist smashing a swastika on his band’s main page with the caption St. Pauli Fans gegen Rechts! (St. Pauli fans against Nazis) underneath it. One of the most notable supporters and sponsors is Andrew Eldritch, lead singer of band The Sisters of Mercy. On his latest tour, Sisters Bite The Silver Bullet in 2006, Eldritch wore the famous Totenkopf shirt. German musicians: Fettes Brot, Die Ärzte singer Bela B, Kettcar, Tomte and many other bands, most of them underground. Punk rock is an anti-establishment music movement beginning around 1976 (although precursors can be found several years earlier), exemplified and popularised by The Ramones, the Sex Pistols, The Clash and The Damned.

In 2008 a movie about Saint Pauli was released in Germany, called ‘Sankt Pauli – Rausgehen. Warmmachen. Weghauen.’ Click on the cover to see the movie preview.. I am sure it can be found on DVD. 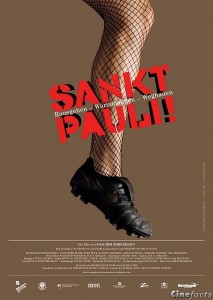 I am tempted to go to a St. Pauli game now. Although I am not the biggest football supporter, I do occassionally watch a game just to feel the excitement and be a part of the fun and I am sure there would be a lot to see at a St. Pauli game.