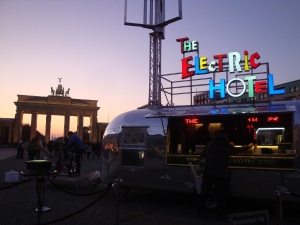 What did we ever do at festivals before cell phones were invented?  Last year, when my cell phone battery died at the Nation of Gondwana I found myself literally disempowered.  Unable to communicate with my friends, I wound up spending about half of the festival looking for them in the dark.  If only the Electric Hotel had been there to light the way.  This pioneering energy project seeks to empower festival goers by providing a mobile point where they can charge up their smart phones, cell phones, tablets and other gadgets with green energy. 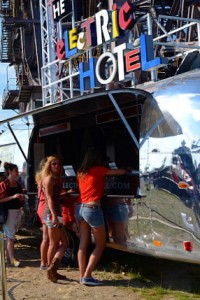 As you can see in the photo below, the hotel is not actually a building but a van so people can’t actually sleep in it.  But it does house an awful lot of electricity that is generated by solar panels, a wind turbine and even stationary bikes.  In addition to providing a place to charge up, the Electric Hotel also acts as a mobile sound system, art gallery and cinema.  It also features a permanent installation about renewable energy, naturally!

If green energy is your thing then you may want to check out the 11th international Solar Energy Trade Fair which happens in Berlin February 21st to the 25th.

If you’re after a more grassroots view of Berlin’s green scene then watch this space: an upcoming Alternative Berlin tour will be following in the tracks of pioneering projects like the Electric Hotel.