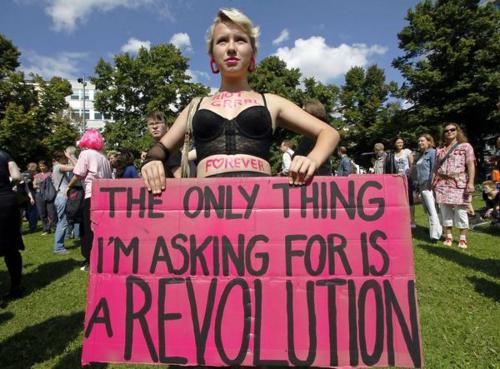 Is there really a ‘war’ between the sexes? Not if you define ‘war’ as an armed conflict between two groups of people who already have lands, rights and freedoms of their own. In a ‘war’ both sides usually have access to weapons and defence training of some kind. Both sides are usually fighting to defend resources or rights that they have been granted by law or tradition. The struggle for gender equality, meanwhile, has been led by women who until recently could not even enter the military; who started off with no rights, freedoms, lands, laws or even leaders of their own. And how many ‘wars’ have you heard of where the victors simply want to work with their opponents for equal pay, or live with them in peace?

The ‘war’ between the sexes is not really a war. If anything it’s a popular revolution; a modern Peasants Revolt. Over the past 100 years, women have invaded the awesome and well-defended structures of male privilege and won some very important (but still basic) rights for themselves: the right to work, to vote, and to prosecute those who abuse or harass them. Even within the past two decades female equality has advanced quickly. Women today are assuming far more visible and important roles than many people alive today thought they ever could (would, should) assume. A similar evolutionary leap happens in every generation and every generation reacts the same way: by asking whether female equality has gone ‘far enough’. The thing is that the gender gap is closing so quickly that people fail to grasp (let alone accept).  As a result, they tend to gauge female progress by past trends instead of by future possibilities. This limits the definition of equality to a relative instead of an absolute standard.

George Orwell warned all revolutionaries about the dangers of replacing absolute equality with relative equality in his book Animal Farm. At the beginning of the tale, the animals take over the farm and create a manifesto that states, “All animals are equal”. Gradually exceptions are added to the manifesto. The pigs and dogs are granted extra meals while the rest of the animals are ‘granted’ extra work. Each amendment that’s made represents another step backwards into familiar, master-and-servant behaviours. At the end of the tale, the pigs amend the manifesto to read, “All animals are equal… but some are more equal than others” thereby legitimizing their new, regressive regime.

This tendency to backslide into familiar, antiquated ways endangers the quest for gender equality every step of the way. Women have gained a lot in the past century: a voice in the courts, in the government, in the media and the workplace. What women are still lacking (in the advanced West at any rate) is equal pay, humane representation in the media (especially advertising).  Oh, and a unilateral say in every political, financial, environmental, educational, medical and military decision that affects them. To accept anything less would be to accept that women are ‘less equal’ than men are… and there’s nothing revolutionary about that.

Fierce females who are looking to celebrate March the 8th with like-minded people should head to Femmes Fraktale’s Soliparty at the Kili Lounge tomorrow night (Thursday). There will be live painting, exhibition, performance and DJ sets by female artists. There will also be a voku (that’s a homemade, buffet-style dinner) starting from 9 p.m. Nearest S & U Bahn is Frankfurter Allee. Enjoy! 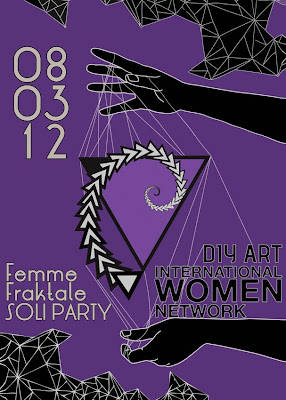 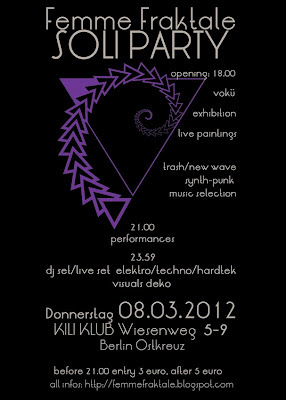