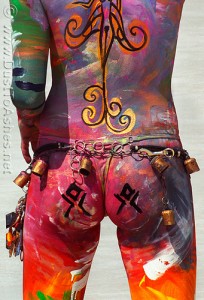 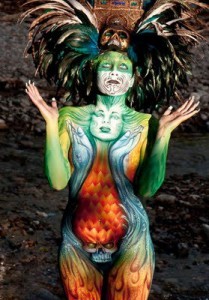 It’s no secret why the  revellers at big, messy, drink-fuelled street festivals like Love Parade and Mardi Gras prefer to paint their faces and bodies.  What better way to dodge the consequences of their actions?   Those morning-after flashbacks that leave one thinking, “That wasn’t me, was it?” are just a lot easier to deal with if one looked like a different person the night before.

Historically, body painting has served a more mystical purpose, as well.  Since tribal times, humans have painted themselves like the spirits whose powers they hoped to channel, the animals they hoped to hunt, and the great warriors and lovers that they hoped to emulate.  These days people continue to paint themselves like animals, aliens, fairies, cyborgs, zombies and more.  They do it to take on a new identity as much as to hide their old one (as long as the new identity has cool hair and multicoloured skin). 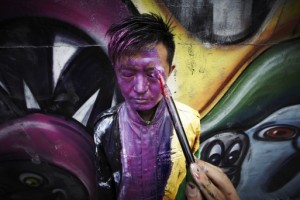 But what about members of the Urban Mimic movement , who use body painting to transform themselves into their favourite piece of graffiti… or something even more mundane, like a park bench? What experience are they aiming for? Probably the experience of scaring the hell out of the first person who walks by!  Urban mimicry also holds a touch of social commentary about the invisibility of individuals in an industrialized world.  It’s probably not surprising, considering that  one of the movement’s founders, Liu Bolin (pictured right), is from China. 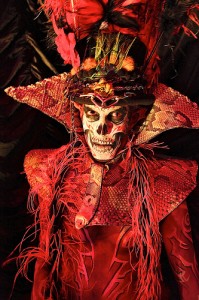 Lately, people have been painting themselves like zombies for the sake of social commentary too. The Zombie Walk movement, which began as an elaborate movie tribute, has been used by Occupy protestors to mock capitalism’s mindless ‘work-shop-die’ mantra.  George A. Romero made a similar point with his 1980s film, Dawn of the Dead.  It failed to change Western mall culture though, so its anti-consumerist message is probably worth resurrecting (pardon the pun).

Body painting is so popular that it is featured at underground events and exhibitions worldwide, all year round.  By far the coolest photo ops are to be found at the annual World Body Painting Festival  which is being held in Austria this year.  Body art is also featured at avant garde festivals like Nevada’s Burning Man (top right), at fetish clubs like London’s Torture Garden (bottom left) as well as at raves, clubs and psytrance parties.

Alternative Berlin’s 666 Anti Pub-Crawl visits venues that feature live body painting from time to time. Join us for a night out and we’ll show you that this city has more than one face… and, maybe, that you do too!