You are a football fan that is not 1) a drunken anti social beer monster 2) armed with a pocket of homemade fireworks or 3) resisting the urge to bellow at the TV screen or fight with fans of the opposing team. Where can you go to get your EM kicks in Berlin? First of all, you’re in the right city for an alternative footie viewing experience. In other cities, fans of the sport are often forced to crowd into dingy “sports bars”
alongside hard-boiled fanatics that look like extras from The Firm (http://www.imdb.com/title/tt0095158/).
Here in Berlin, football has enjoyed a bigger frisson of cultural sophistication every since it hosted the World Cup in 2006. The
sport’s newfound respectability owes as much to Berlin’s artistic and understated vibe as it does to the wide variety of locals who take an interest in the sport.
These days, big football matches are almost always screened outdoors where passers-by can drop in and hang out without feeling pressured to belong to a hardcore niche. The Fanmeile at Brandenburger Tor is the biggest and best-known open air viewing area of all. It’s free and hugely popular but for those of you who want to watch the match somewhere cool to boot, there are other options.

Wir Sind Parallel (https://www.facebook.com/wirsindparallel) puts on
EM parties every match day at Griessmuehle (http://zurmoebelfabrik.de/griessmuehle/) in Neukölln. As well as live action, you can always watch live painting by artists from collectives like The Weird (https://www.facebook.com/theweirdcrew) or
listen to live DJs. Other nightlife spots that are showing the football include Rosi’s (http://rosis-berlin.de/) YAAM(http://www.yaam.de/) and Cassiopeia (http://www.cassiopeia-berlin.de/) in Friedrichshain, as well as Tante
Käthe in Prenzlauerberg.

Offsites (https://www.facebook.com/OFFSITES) is a more DIY option still. Operating from a truck emblazoned with the words “FC Anywhere United”, these guys (and gals) have been setting up their Beamer at random locations throughout the city on match days to bring football to the masses. They also organize hit-n-run style football games in the streets (pictured below).

If you want to watch the EM surrounded by bona fide Europeans, or if
you just prefer a non-partisan atmosphere, then hostels like Pangea People (http://pangeapeoples.com/) , Sunflowerhttp://www.sunflower-hostel.de/de/ and all the Baxpax hostels http://baxpax.de/downtown/ are another option.

But on any day when Germany’s playing, you can expect to see the matchin most Berlin venues, whether they’re punk, metal, techno, hip-hop orhipster. Even the farthest-flung fringes of the city’s subcultures refuse to stay on the sidelines when it comes to the Beautiful Game. 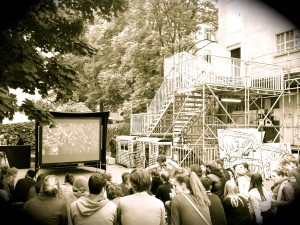 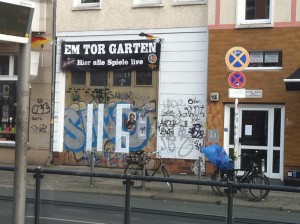