A rather macabre subject, but you would think that when searching for suicide trails there would be more available on the topic, especially for fans of creepy stuff around the world. I for one, am not really into creepy graveyards or suicide walks but I do find the topic quite interesting. For those who are into it however, you are in luck as there is a suicide graveyard right here in our very own surrounding greenery, in the Grunewald.

Back in the day – like before 1840, it was considered really disgraceful for people to take their own lives. In fact for a very long time it was even prohibited and the families of those who killed themselves would get charged and persecuted as it was the law of the church who had a lot of say back then.

The Berliners were smarter though ,  so they found a place nearby that was green and beautiful and where they could bury their suicidal relatives  in secret. Many bodies were also found by the foresters and fished out of the rivers after leaping off a nearby bridge. 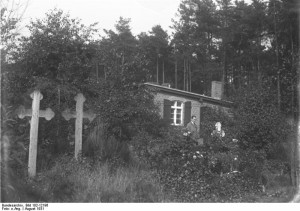 Over time the laws were changed and from the late 1920s the crowd that are currently buried there are not only suicide victims but also children and other types of people,  as well even as some famous people. All  have made this their chosen final resting place with names such as German writer, Clemens Laar and researcher Willi Wohlberedt, who spent his life researching Graveyards around Berlin and a few other famous people who too can be found buried there. The remains of the broadcaster Clarén idol aswell as the beloved pop idol Nico, the famous Berlin supermodel, actress and singer of the Velvet Underground can be found buried here, next to her mother. Nico worked with Andy Warhol who introduced her to the Velvet Undergound when he was managing the band.

You will find the entrance at these given coordinates N52° 29.X   E013° 12.Y which you can easily reach by a short walk or by bike from Schildhorn. The cemetery is open from 7am to 8pm in Summer and 8am to 4pm in Winter. How to Get there: Take the S-bahn to Heerstrasse, from there take bus 218 to Havelweg and walk to Schildhornweg 92.

More info about the topic can be found here :-
http://mourning-souls.livejournal.com/796209.html

While still on this morbid subject, I would also like to  mention another very famous suicide spot in the world. I absolutely love to watch good documentaries and once stumbled upon a brilliant documentary by VICE magazine – they often cover the most interesting and unusual topics. It is about this well known suicide cemetery in Japan called Aokigahara Forest, also know as sea of trees. The forest lies to the northwest of Mount Fuji and has been a popular suicide spot since before 1960 although it was believed to be associated with the 1960s novel, ‘Tower of Waves’  and has always been associated with demons of death,  but basically people go to the forest often camp out and wait to die – sometimes they starve themselves but mostly they hang themselves.

So if you walk through this forest, it is likely that you will find skulls and bones or even corpses of various people who have killed themselves as well as their tents and belongings. Sadly the place is now popular with thieves who have started to go there to rob the corpses of jewellery and other possessions. The park care takers have a big job not only stopping people trying to kill themselves but now also trying to weed out the thieves. 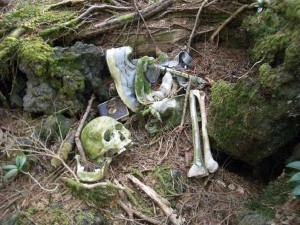 Fascinating place even if rather depressing.

For more information and to watch yet another awesomely fascinating Vice documentary about the topic watch this:

At least these days you are free to kill yourselves, not that I am at all condoning this.

Lastly on the subject of suicides, there is a great popular club in Berlin called Suicide Circus you might want to try out when next in Berlin especially in the summer months as it has an open air floor for the warmer days. If you need your house and techno fix and are looking for a great place to party in the summer check it out!

Also, if you do ever manage to explore the cemetery near Berlin or when next in Japan – the Japanese phenomenon,  please feel free to send us your stories and pics in the comments below.