Finally summer time is here – the parks are looking luscious with loads of blossoms and greenery everywhere and smiles abound. It has been a really long awaited summer and although it is still cold at times, in my opinion,  one can get one’s ball sports, table tennis, cricket, volley ball and frisbee on like never before. 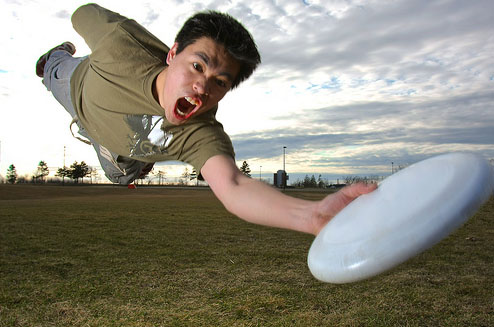 Was throwing a frisbee about the other day and it got me wondering where it actually came from, so I looked it up. It seems that it came about when a baker appropriately named William Russel Frisbie back in the 1870s in Warren Connecticut, branded his pie tins of his home made pies with his name, Frisbie which came to become quite a well known brand in the surrounding areas. Then in the 1940s Yale students started throwing the pie tins around.

A decade later in California a flying saucer enthusiast (naturally) designed a saucer like flying disc after the owner of the company Wham-O that manufactured the first commercial frisbee.  On a promotional tour the president of Wham-O saw the kids throwing the branded pie tins and the name Frisbee began as the name was changed from Frisbie to Frisbee to avoid any legal problems .

And that is how the frisbee was born 🙂

If you want to also see Berlin’s own flying saucer, you can see it from the Spree. It can be found across the river from the abandoned Spreepark fairground in Treptower Park. Built by a Finnish designer called Matti Suuronen. He was supposed to design about 100 of these space houses between 1968 and 1973 made of fiberglass-reinforced polyester plastic, but the budget was cut before the end of the project  due to cost cuts from the 1973 oil crisis. So only about 20 were built. Even the Soviet Union had ordered 35 Futuro houses and about 100 other plastic houses from the Casa Finlandia series for the Olympic Games in Moscow in 1980. The order was cancelled due to the Olympic boycott.

For more info on this subject see: http://en.wikipedia.org/wiki/Futuro 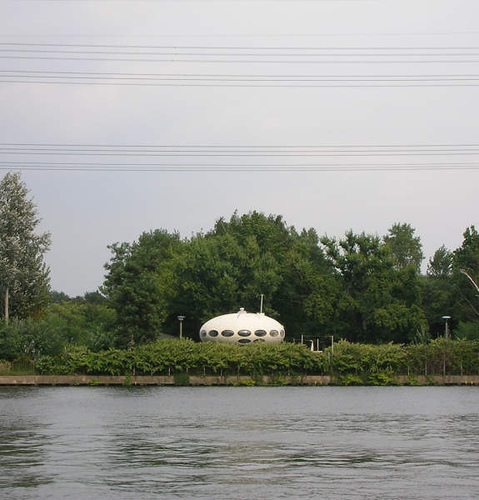 The idea of the cabins was to have a structure that would be quick and easy to construct and heat in rough terrain or a transportable home which could be easily mass replicated and situated in almost any environment. This would mean that it would need to be easily transportable so the house consisted of 16 pieces that could be constructed or dismantled on site or airlifted as one piece.

Another 15 UFO houses can be found around the world including in places like New Zealand And Utrecht.

If you would like to see the UFO for yourself, come along on our  Urban Culture Tour´s  visit Spreepark/Treptow tour. 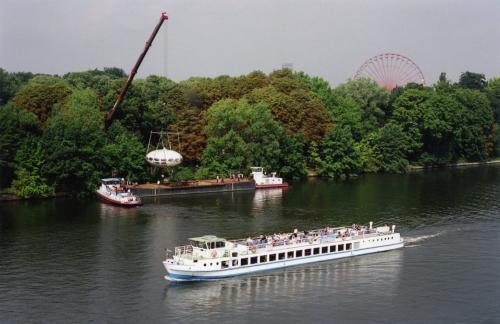