It was just nearing the end of winter and becoming slightly more bearable to go outside. If you live in Berlin or are just visiting, you really should check out at least one techno party and at this stage I had not yet, apart from a short one night stint at Bergain once.

I had not been able to do all the things I wanted to before when I lived in Berlin for reasons that I would rather not state here, but I really took the opportunity when I finally got the freedom to do so. I also was quite proud of myself because this last winter was the first winter since moving here 5 years ago that I had managed to brave the ice cold winter and cycled through most of the iciest days, which is quite common for the hardened Berliners.

So, on this particular day, I had seen on Facebook beforehand that there was an open air party near Hauptbahnhof, Berlin’s large international station.

So  I got on my bike on a Sunday afternoon and headed in the direction of the party. It was next to the station, along the river in this area and was in a very industrialized area. There is not much around there besides what seems to be warehouses and factories at the moment and a highway, but I did come across a few containers that looked like they contained props for movies. It was an awesome photo opportunity – I even found a fake statue of liberty statue which looked pretty cool. 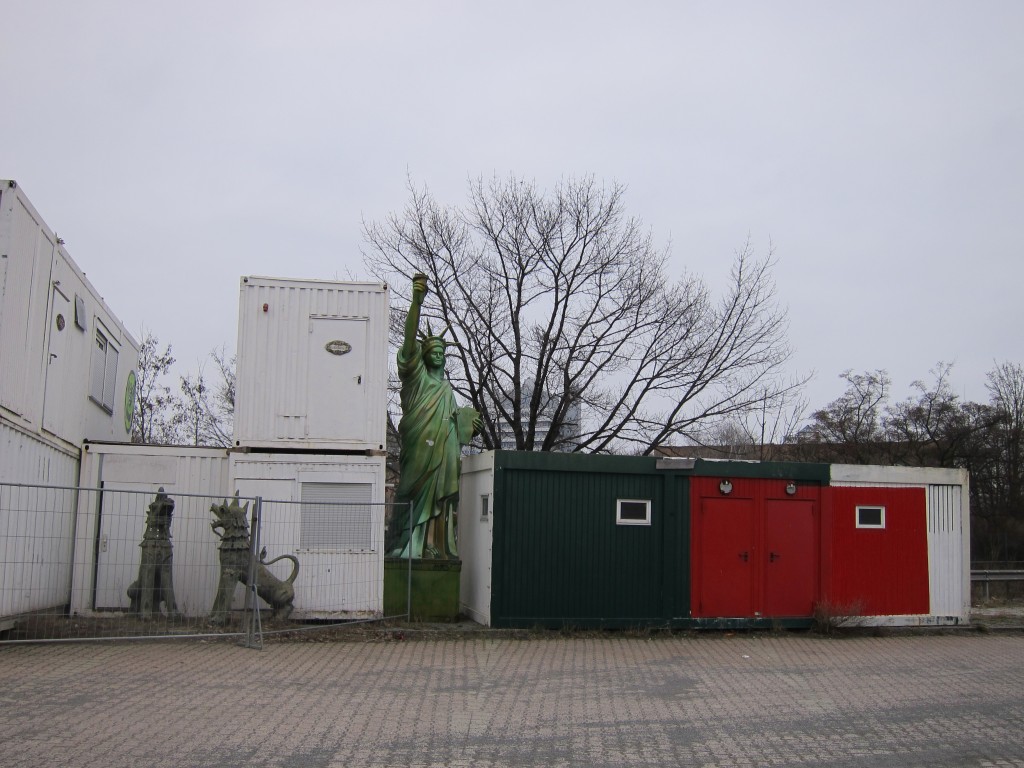 I did a bit more exploring and cycled up and down some ramps which I like to do and found the view of the nearby factory somehow enchanting -it is odd how something like  a dirty, smoking factory can in it’s own essence also somehow be quite beautiful. 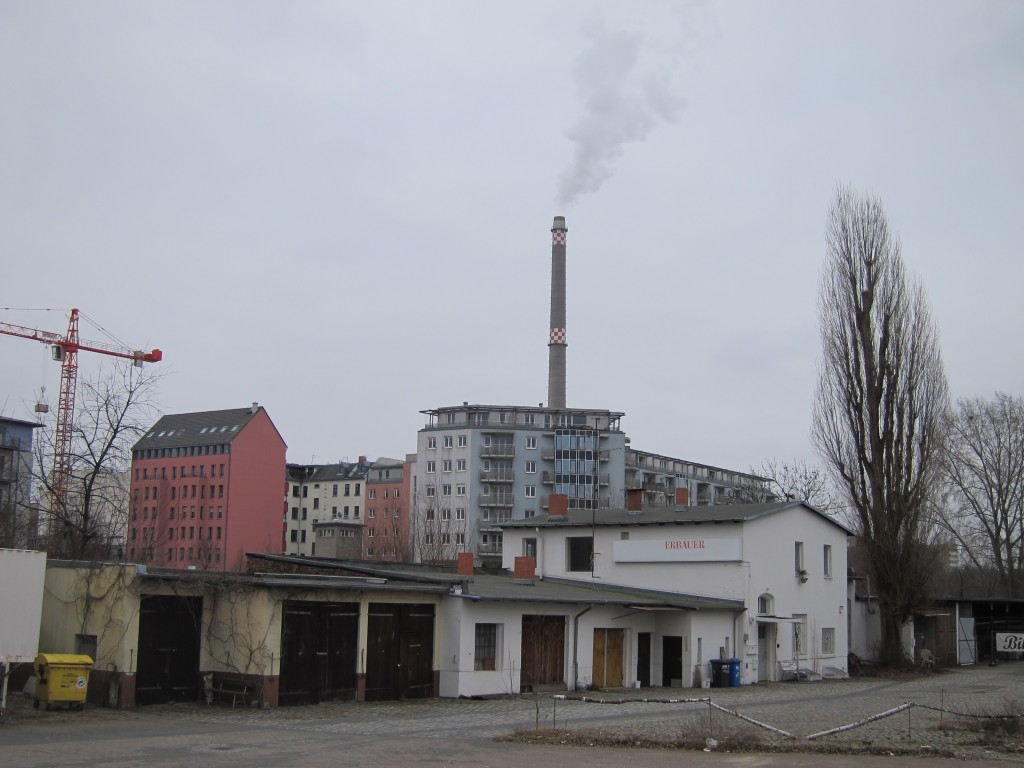 After cycling around a bit, I found the venue for the party – the techno was already audible from outside, it was about 1pm. The police were also already there – they always seem to turn up when something is going on and later on I saw them asking the people if they had the correct pass to hold the party, which they thankfully did. I paid my 5€ entrance fee, which is really not a bad price and went inside. The venue was awesome- might be an abandoned beach bar as it did have some bars already. There was some cool graffiti as there usually is in Berlin at the entrance. 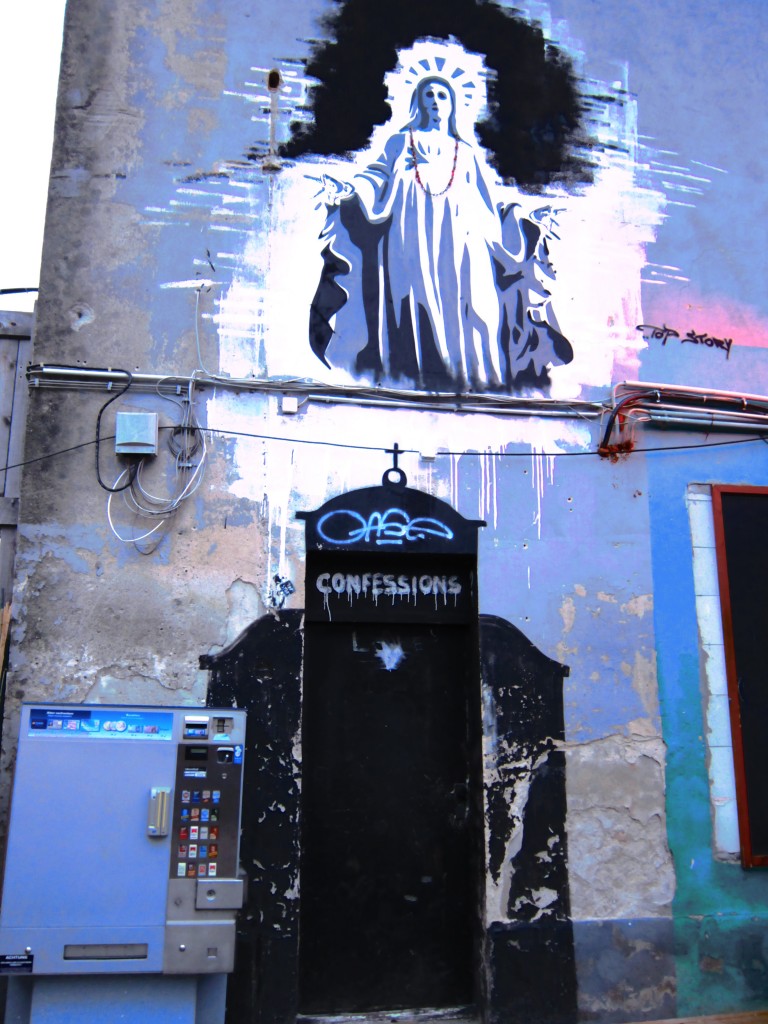 For a first time techno experience aside from that time at Berghain, which i find a bit too advanced adult for my taste, in terms of clubbing, it was pretty damn amazing!

The techno was pumping and all the people were dancing on .. it was the mid afternoon after all and I wondered if some had come from clubbing as people in Berlin tend to party all weekend sometimes.

I have not ever managed to stay up past 4pm the following day after a nigh’s rave, so I really do not know how people do it. My guess is they must have the help of narcotics to get them by or club mate, which is must try. It is an ice tea with a fairly odd taste. I have not really noticed if it is sold in other parts of Germany, but it is definitely a staple drink in Berlin – if you ever feel exhausted or run down, and not even coffee seems to work, give it a try – it will definitely wake you up. 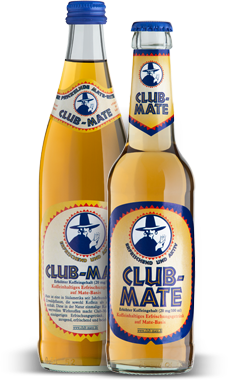 Unfortunately, I had to leave a bit early as I had some things to do that evening, but I did get to get a bit of a party in and even made this video. It was amazing! I have never see a guy play guitar while a DJ played and I found it pretty impressive. They guy even played the guitar behind his back and with his tongue at some point too.

Here is a video I made of the event that day:-

So if you are in Berlin you should really check out an Open air party – here are a few links to check out.

I have not had the opporutnity or time rather to go to one of these in the summer, but from what I have seen the line-ups looks good and the venues look great too with many being in really great outdoor venues like Badeschiff and roopftops etc

Also, if you have enough time and can handle going out alone, just get on your bike and cycle out on an adventure. There is one around every corner in Berlin and many are either free of very cheap – you never know what new people and new experiences you may encounter!