One of the most exciting things about our beloved city is the never ending search for new or old for that matter spaces, side streets and areas that one would never expect to find a creative hub quietly making waves.

Tranformations of old abandoned  buildings being made into new spaces for creativity, events and more are a very common feature. The huge beautiful and ancient looking building complex on Prenzlauer allee is no exception to this rule.
I took it upon myself to check it out one day after a tip , but it seemed currently closed to the public apart from the bar and restaurant and a popular currywurst stand outside the entrance. I asked the security guard when it will be officially open to the public and he said 2020. Seven years to wait to see whats in the underground chambers of this famous old Bötzow Brewery complex ??? Like a baby in the in the womb for a very long gestation period waiting for this wonderful creative space will be born ( I have also read that it will be ready in 2015) this old fossil waits to be awaken from it´s slumber. Only a handful of lucky few have a personal tour and peered into the past while taking a sneak peek of a future creative , entertainment powerhouse.

The buidling originated in 1864 when Julius Bötzow opened his brewery in the old Schönhauser straße with money he has received from his uncle as start-up capital, (it seems even way back then Berlin was filled with start-ups 😉 On the 12.12.2011 there was an opening party event which saw 200 attendees at which he also explained his ideas for the brewery.

Bötzow had been introduced to making bottled beer during an apprenticeship so naturally, he built a brewery and installed one of the very first steam boilers in Berlin. It became so popular that Bötzow later moved the brewery to a much larger venue in Prenzlauer allee to hold a a 4,000 m² underground storage cellar and nearly 6,000 people in the massive beer garden which had become a major local attraction. Some of this massive construction is still around and has been preserved.

The Bötzow family ended it’s ties with the building after the suicide of the owner’s son.  Since then the building has been re-trasformed many times as a warehouse and a market site, until Näder set his sights on acquiring it in 2010

Tours of the underground cellars  through manholes are available. This is where the bottles were once stored and old underground horse stables can also be found there. Many of the people that have done the tour found it very interesting and hard to believe that people once worked there. 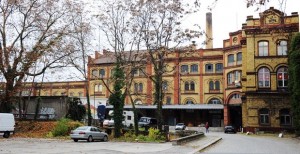 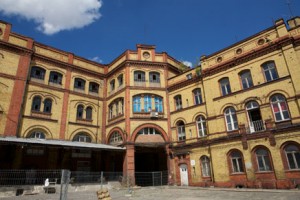 The massive building was recently reopened and bought by a local Berliner called Georg Näder who plans to recreate the space and use ot for many functions and ideas. It has been in the process of being transformed into a new vision of Näder’s since then. The location is perfect as it is on the border of Berlin’s 3 most lively neighbourhoods, Mitte, Prenzlauer Berg and Friedrichshain.

Over the years, it has been used for various things like events, film sets and storage, it is still being realised, but will  come to life at the right time before in the next few years. It will still always have a Berlin feel and is thought to have been motivated by London’s Camden market and New York’s Chelsea market. He wants to keep it uniquely Berlin and wants to preseve the building’s vintage look.
The famous British architect David Chipperfield is working on the master plan for the building. He plans to involve areas along Staarbrücker street and Prenzlauer allee. His ideas involve things like placement of a hotel, an art gallery, a beer garden with microbrewery and a swim club.

Näder says that the building is still being modified and ideas are discussed often about what the building should have in it – as it is such a large venue the options are umlimited.  Näder has been travelling the world and gathering his best ideas for it and one day we will have the priveleldge of visiting this amazing preserved and newly revived space. Hoping that it´s worth the long wait.