If you have previously joined us on one of our tours at Alternative Berlin one of our knowledgeable tour guides may have shared with you the story of Osman Kalin and his tree house that he constructed on a piece of East German land that sat on the West side of the Wall. Osman took advantage of this bizarre land situation, but strangely enough, he wasn’t the only one in the city to do so.

During the construction of the Berlin Wall in 1961 a triangle piece of East German land near to Potsdamer Platz got cut by the Wall itself. As neither the West nor the East could make practical use of the land, it sat empty for years until May of 1988 when a group of around 40 people occupied the land and dubbed it the Norbert-Kubat-Dreieck named after Norbert Kubat who had committed suicide one year earlier in his jail cell after being imprisoned for his involvement in the famous 87′ May 1st riots. 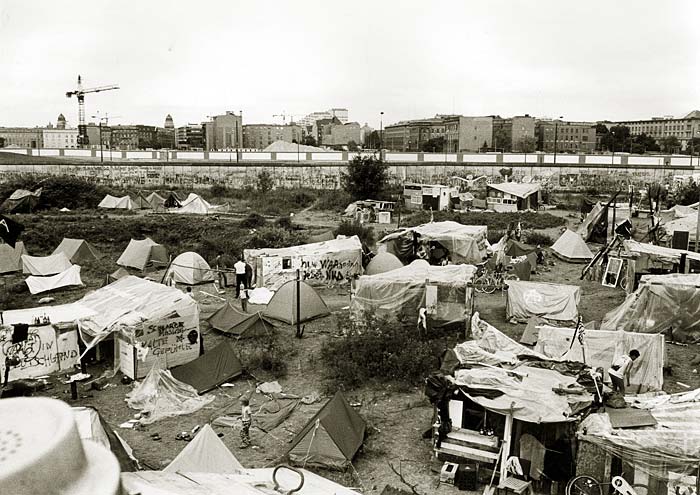 The land of Kubat-Dreieck, as well as various other East German land enclaves in West Berlin, had actually been sold to the West in March of 88′ for a price of 76 million Deutsch Marks. However the hand over day of the land was not due until July of the same year. The West Berlin government plans for the land were clear. A city highway with tunnel was to be built on the land, which angered many environmentalists and other locals. Protests then ensued, which was then followed by the occupation of the land itself. 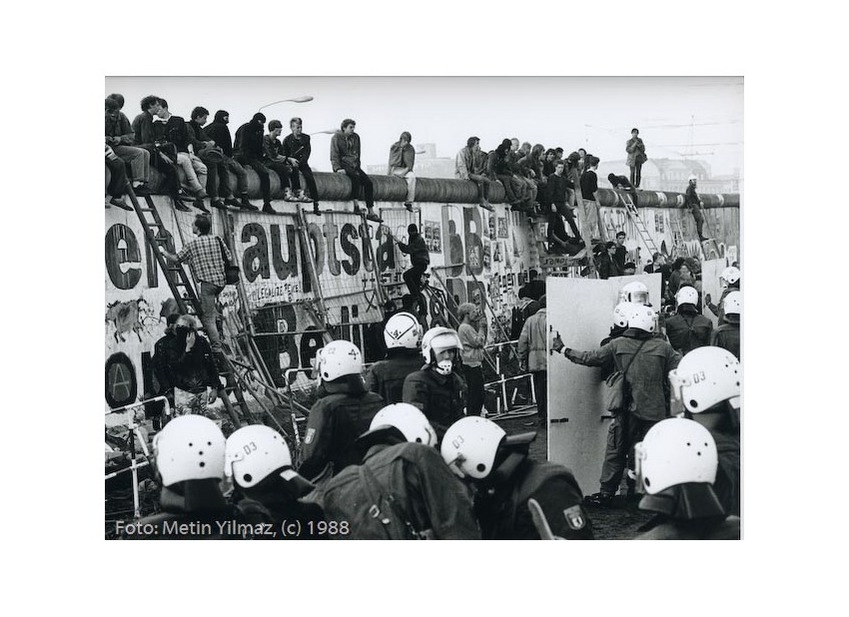 The tent and hut community village that was created at Kubat-Dreieck was home to an urban garden, a little farm, group cooking nights and other events. The location became a popular hangout for both locals and tourists alike, but unfortunately for the squatters it also drew attention and annoyance from the political powers on either side of the Wall. 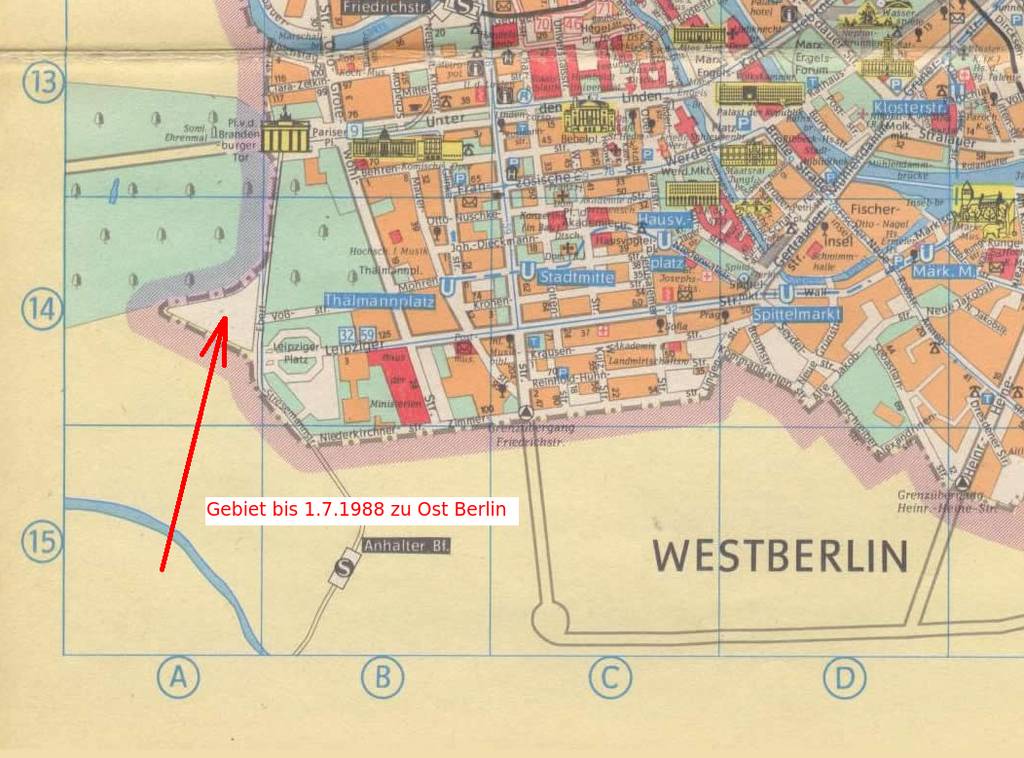 Within the space of a couple of months, Kubat-Dreieck had turned from an alternative utopia into a straight out war zone. Cat and mouse games between the squatters, with the help of other Leftists who had jumped on board, and the West Berlin police escalated into a stone and Molotov cocktail throwing attack from one side and a water canon blasting and tear gas assault from the other. As the battle took place on the streets on the West side of the Wall, East German gas mask wearing border guards peered over the Wall and even helped the squatters and Leftists by telling the West Berlin police to stop drowning East Germany in tear gas. But this wasn’t the only kind gesture that was made by the border guards. 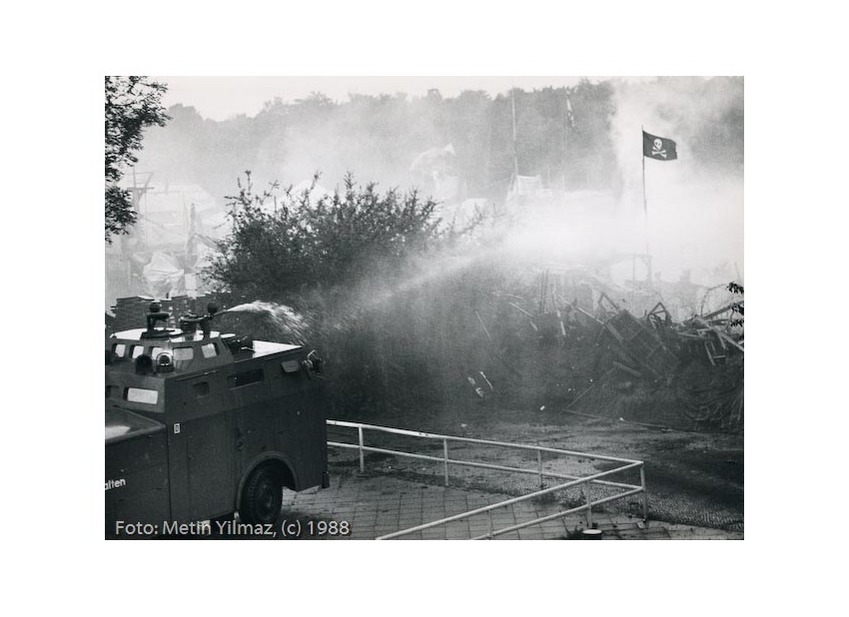 On the morning of July 1st 1988, the day of the official land handover, one of the strangest events of the Cold War took place. As the police encircled them, around 200 remaining squatters and Leftists, with animals and bikes in hand, climbed the Berlin Wall jumping into the Death Strip where East German border guards had trucks waiting to take them away to ‘freedom’. The protesters were taken into East Berlin, albeit for only a short time. Later that day they were taken back to the West Berlin and apparently even given free transport tickets from the East as a parting gift. 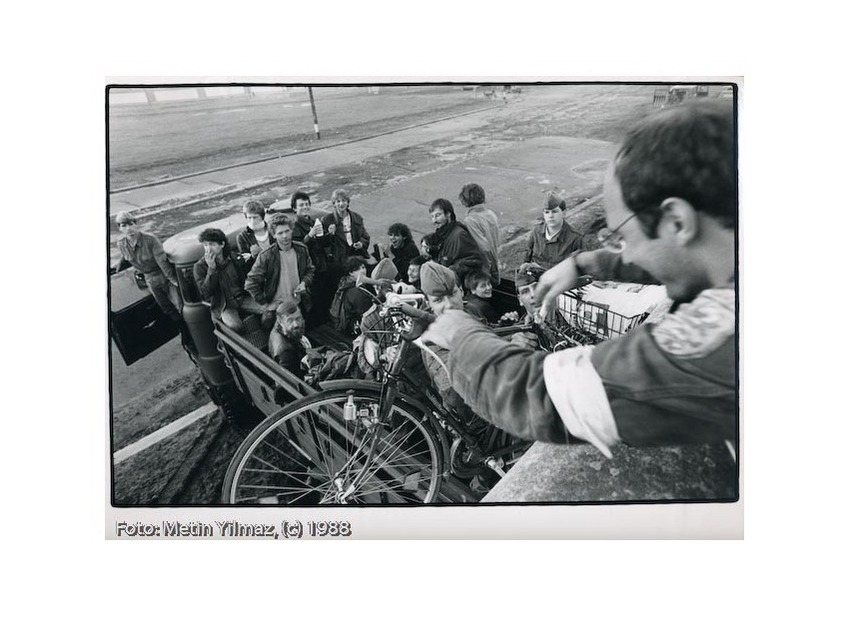 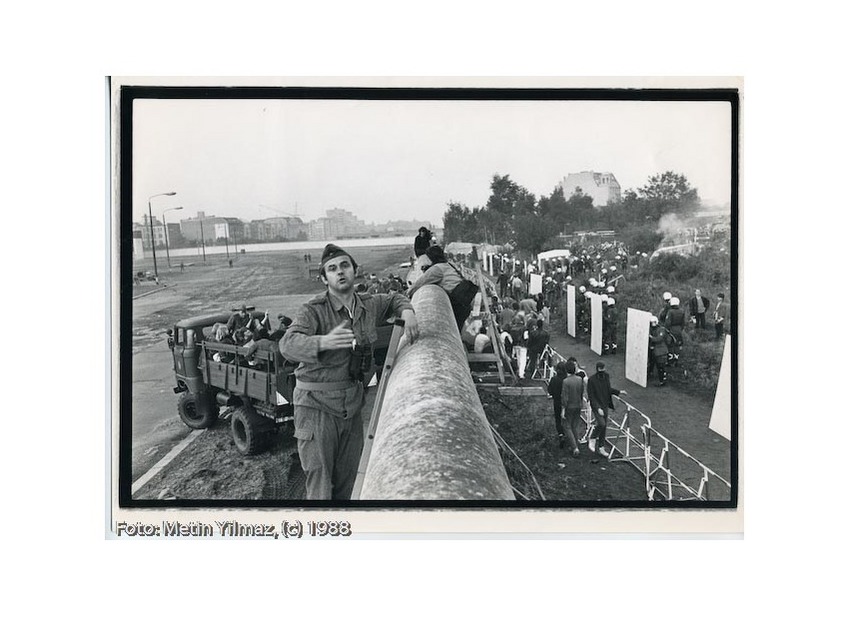 Kubat-Dreieck today is in the middle of the modern Potsdamer Platz area where towering skyscrapers have been built in the area where the Berlin Wall once stood. The story of Kubat-Dreieck is certainly a bizarre one, but it also not too different to other stories of protest and occupation in Berlin. This tradition runs deep in the history of modern Berlin and is something you can find out more about by joining one of our tours.