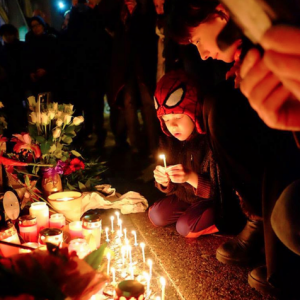 As the world paid tribute to icon David Bowie yesterday, in the cold and gloom of a dark Berlin winter evening, people gathered outside a now infamous address in West Berlin. Hauptstrasse 155. In 1976, David Bowie shared a flat here with Iggy Pop. It was the best place for people to leave flowers, candles and sing “Starman” into the night. Soon a huge collection of tributes to the adopted Berlin icon had grown outside of the building.

“He’s one of us,” said Berlin Mayor Michael Mueller on hearing the news of Bowie’s death. So what is it about Bowie, and the time he spent in Berlin that makes Berliners feel so connected to him?

When Bowie moved to Berlin it was a very different city to the one you see now, the cold war was on, the wall was still up. He enjoyed an anonymity living in Berlin that he couldn’t achieve anywhere else, and the backdrop of Berlin at this time spurred Bowie into creating what many argue are his three best albums. Referred to as the “Berlin Trilogy” they were recorded at the now legendary Hansa Studios in Kreuzberg, right beside the Berlin Wall. This is where he recorded the song Heroes, the song that became an anthem for unity and freedom.

In 1987, Bowie returned to Berlin and performed in front of the Reichstag to 70,000 people on the West side of the wall, but the East Germans on the other side strained to listen and caused a riot, shouting that the wall must come down. Two years later, it did.

Bowie described Berlin as “The greatest cultural extravaganza that one could imagine”. Creatives have come in their droves since, but Bowie put Berlin firmly on the music map. A lot of people follow in the footsteps of Ziggy Stardust by coming here to work out who they want to be, to create, to connect with this incredible city. Bowie also famously described Berlin as “a city that’s so easy to “get lost” in – and to “find” oneself, too”, and he was completely right.

Here at Alternative Berlin ground control, we’re looking forward to the amazing art shows, concerts and other events that are sure to happen in Berlin in Bowie’s memory, we’ll keep you updated. Make sure you follow as at https://www.facebook.com/alternativeberlin/?fref=ts.