Since February, more than 800,000 people have come to Germany from Ukraine, fleeing the aggression of Putin’s full-scale invasion. Many of them came to Berlin. Berlin has a long tradition of welcoming victims of wars and persecution. Recently, Käthe Kollwitz’s famous anti-war poster exclaiming “Nie Wieder Krieg” (EN: No More War) has resurfaced on many building walls, while countless blue and yellow flags decorate the window sills. One thing is abundantly clear: Berlin stands in solidarity with Ukraine.

But the war has left many of us with a sense of helplessness – with a strong desire to help, but unsure how to do so in a meaningful way. One of those is the wonderful Jake Sweetman, who guides people around the alternative parts Prenzlauerberg, Mitte and Kreuzberg, when he’s not doing journalistic work.

Recently, Jake started a blog, “Portraits of War”, where he writes individual stories about people in Berlin whose lives are turned upside down, whether directly or indirectly, because of the war in Ukraine. The individual stories remind us of the humanity that gets lost in all the politics and statistics of war. It is the people who experience helplessness, hopelessness, confusion, disarray, and above all, grief.

In his diverse selection of portraits, Jake has spoken to Anastasiya, who came for a weekend-trip to Berlin to celebrate her birthday. Two days later, the war broke out and she has been unable to return. He tells the story of Yuriy Seredin, the jazz musician from Lviv, whose creativity has taken a toll by the war, and of the Kharkiv native Yuriy Gurzhy, whose strong roots to his family and native city are represented in his music.

But not all of Jake’s portraits are of native Ukrainians in Berlin. Tahir’s story echoes the postcolonial hypocrisy and unfairness many of us have noticed with the enormous difference between the migration from the Middle East and Africa up to a decade ago and the present Ukranian crisis. Journalists, such as Ingo, who curates an independent press in Belarus, and Emanuelle, who works as a news correspondent and documents refugee movements. Journalists, such as these, tell us the crucial stories that are so important in keeping the issues alive. Lastly, there is Anna, Russian native who lives in Berlin with her pro-war mother, and whose family relations are broken due to her pacifist stance. Russian aggression has brought her uneasiness in Germany, as she fears that others might judge her for Putin’s war.

Jake’s wonderful portraits are a must-read for anybody, who wants to get a personal yet varied look into a few of the many personalities in Berlin that have been deeply affected by the war in Ukraine. Take a look at his portraits here: “Portraits of War”. Jake can also be found most weekends leading the Real Berlin Experience Tour. You can book your next tour here.

If you want to support Ukraine’s cause, here is a link to a group of Ukrainian artists, who have posted several useful links. 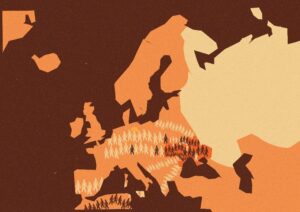 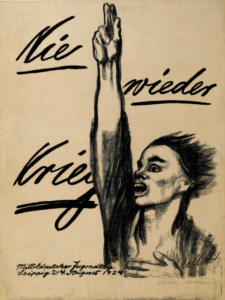