Riots, fights against the police with horses, fears of a revolution, and entire neighborhoods standing together against forced evictions. The circumstances that caused the Blumenstrasse riots in 1872 are all too familiar today.

On 25th of July 1872, exactly 150 years ago, a carpenter named Ferdinand Hartstock was thrown out of his apartment in Blumenstraße 52 in Friedrichshain, after the landlord found out that he had a subtenant in his flat. The landlord used the opportunity to increase the rent, and when Hartstock was unable to pay it, he was evicted. With his furniture on the street, he was arguing loudly with the evicting official. As the neighbors heard the quarrel, they rushed to the carpenter’s aid.

Word quickly went around the neighborhood, and in a matter of hours, more than 2000 people were on the streets of Friedrichshain, protesting in solidarity with the evicted Hartstock. Police on horseback quickly arrived, charged into protesters, and began beating them with sabers. But they were soon overpowered by the masses, as protests turned into riots. The mounted officers fled after being stoned by rioters.

The heat continued until 3AM, when the pubs closed and the crowds slowly dispersed.

The next morning was a planned demolition of a slum near Frankfurter Tor. The demolition, carried out by the fire department, only added fuel to the hostilities. Riots grew double in size, and they spread to several other parts of the city. The police was completely unable to contain it, as people threw stones and oil lanterns after them.

Again, things quieted down after 3AM, when the pubs closed.

On the third day of rioting, the German Emperor Wilhelm I feared a new revolution brewing, and such, he sent in the elite military as well as more than 800 policemen to contain the uproar. Luckily, not a shot was fired. They were eventually able to disperse people and gain some law and order.

By the end of the three-day turmoil, 102 police officers and 159 protesters were injured, and 85 were arrested. 32 people were sentenced to prison terms, the longest was sentenced to four-and-a-half years in jail. No further actions were taken to solve the housing crisis, which caused the whole affair, and it would be several decades for tenents’ rights to come into the political discourse.

In 1872, the same year as the riots in Blumenstraße took place, Friedrich Engels wrote his answer to the housing crisis. The German philosopher and co-author of the Communist Manifesto argued that part of the solution was through the expropriation of flats from landlords, and competent management of them with a view toward optimal utilization rather than optimal profit.

The famous words by Mark Twain that “history doesn’t repeat, but it rhymes” seem eerily relevant when looking at the present-day housing situation in Berlin. The crisis of 1872 was caused by a combination of many factors: population boom due to the industrialization; speculative housing bubble as supply was much lower than demand; private interests saw housing as a way to line their pockets rather than a social necessary. The population in Berlin today has increased incrementally in the last decade. Rents are steepily rising, and landlords curtail essential repairs as ‘modernizations’ in order to increase the rent. Affordable rent is becoming extinct in many areas of the city.

In September 2021 Berliners went to the voting booths to decide on whether to expropriate flats from corporate landlords. The referendum, “Deutsche Wohnen & CO Enteignen”, was passed as more than a million people, or roughly 59% of the voters, said yes to expropriation. What the referendum entailed was that the city would seize apartments from corporations that own more than 3000 apartments in the city. This amounts to about 243,000 of the total 1,5 million apartments in Berlin. The 12 corporations that would be hit would be compensated below market value.

The result was a tremendous victory for the people of Berlin. The success of the campaign can primarily be attributed to the impeccable organization, which has overwhelmingly been focused at the neighborhood level. Local and decentralized actions and protests are organized by grassroots action groups, showing housing being a social purpose rather than economic goal.

Engels’ solution 150 years ago is as relevant today as it was then. Housing is a human right, and everyone must have access to affordable rent. Whether expropriation will take place remains to be seen, but one thing is certain: Berliners have a long history of standing together against oppressive housing policies. The tide seems to be turning: Expropriation or not, the referendum will be impossible for the government to simply ignore. 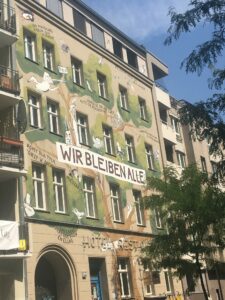 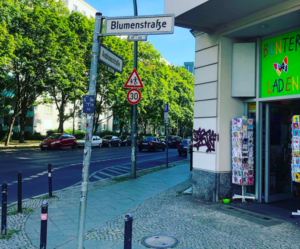