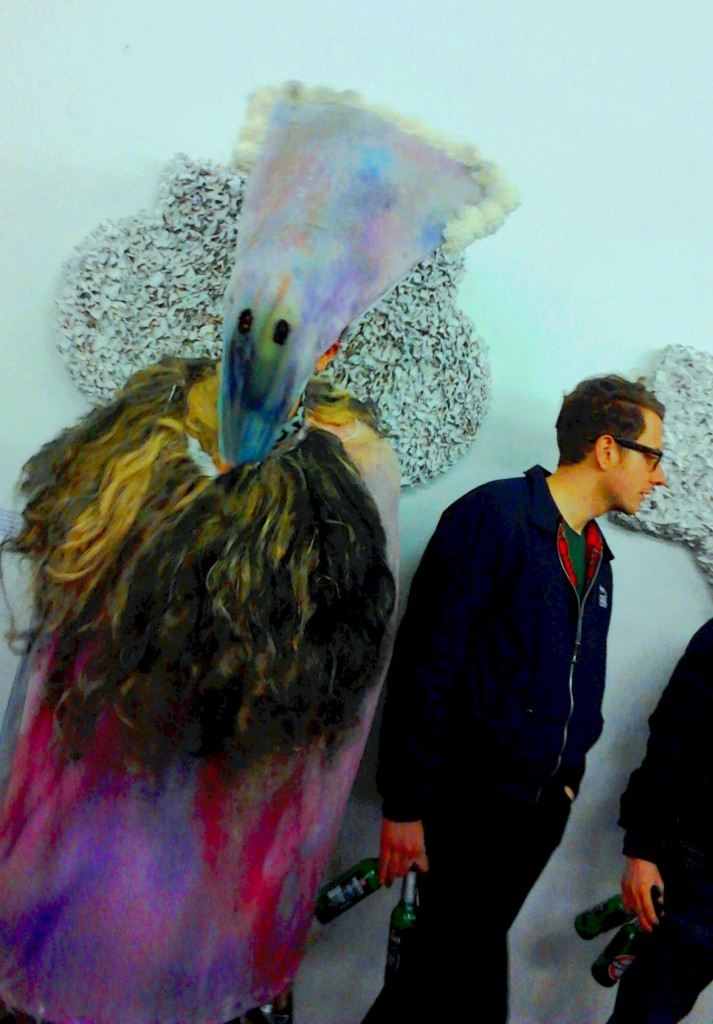 In the very same week that Tacheles is threatened, a new art squat makes the  scene by hosting an exhibition of 28 independent artists.  The amount  of people willing to make the trek out to suburban Weisensee for an exhibition opening on a Thursday night probably speaks to the social skills of the artists  involved in Things Fall Apart but it also symbolized the void that  Tacheles’  virtual closure has left in Berlin’s non-commercial arts  scenes.

The facebook page for Things Fall Apart reads, “The artists of the show were inspired to breathe new life into these forgotten spaces and interpret what it means to fall apart.”   American ex-pat and Alternative Berlin guide Benjamin Spalding interpreted this theme through an altar room made up of discarded and found personal possesions.  The result was a darkly cool space lit with melted candles massed on every surface, their light reflecting off the high ceilings.  It was like stepping inside of a Christian-pagan chapel from a freer time in history. 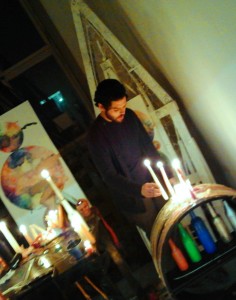 Ben, left: “I always imagine myself hacking through a very deep, dark, purple  forest and coming across different signs and decoding them.”

Ben was one of four artists at the exhibition who moonlights as a tour guide for Alternative Berlin.  Or perhaps it would be better to say that they ‘daylight’ as guides for Alternative Berlin because lately their nights have been preoccupied with conceiving and developping this exhibition.  By day they’ve been giving tourists and travellers the inside scoop on Berlin’s underground scenes but by night, they have been hard at work creating portraits, politically surreal installations and scrap altars for this exhibition  You can see some of the results of their works below. 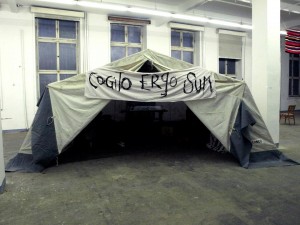 The exhibition has been so popular that it will be kept open for another two weeks and visitors may well find themselves rubbing shoulders with Mayor Klaus Wowereit, since he’s expressed an interest in checking it out.

Before the advent of ECC Atelierhaus, the exhibition space, Weissensee was an overlooked neighbourhood but Things Fall Apart has helped to put it on the map for Berlin’s alternative arts scene. 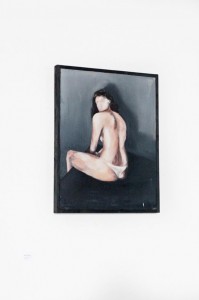 Events like Things Fall Apart shouldn’t really be called exhibitions at all because actually, they are convergence points for the living, breathing community that is Berlin’s non-commercial arts scene.   To the outside observer, a gallery like Weisensee might seem to have sprung up out of nowhere.  Some might even be tempted to conclude that places like this are transient or built on hype – a cultural flash-in-the-pan.  In reality, the Berlin art scene’s ability to disassemble and then re-assemble itself anywhere at relatively short notice is a testament to its cohesiveness as a community. We at Alternative Berlin are proud that our own guides can be a part of that.